Guide to the Best Bottles and Teats for your Baby

For a first-time parent, making the decision to use bottles to feed their baby can be empowering and a relief. It can also be overwhelming! There are so many options out there that choosing the right amount and type of kit is mind-boggling.

Never fear! As always, we’re here to help you! Our useful bottles for babies shopping guide will help you to decide which newborn teats to try and where to source the best baby bottles UK retailers sell. We will also answer the most common questions, from ‘How many bottles do you need for a newborn?’ to ‘How will I know when to change teat size?’.

The best teats and bottles for babies – a shopping guide

This 6-piece set is fantastic value with four bottles (2 x 150ml and 2 x 260ml) and orthodontic teats that are suitable from birth to 18 months, a dummy and a bottle brush.

The soft bottles and extra wide teats are designed with a mother’s body in mind. They are super effective at preventing colic and the way the milk flows will feel natural to a baby who has been breastfed.

The dummy was ingeniously developed to stop jaw misalignment and the bottle brush is flexible and robust enough to clean the bottles and make them ready for the steriliser.

The breast like teats are award winning and loved by babies and carers all over the world. The feel of the BPA silicone allows for an easy latch and a smooth transition from breast to bottle. 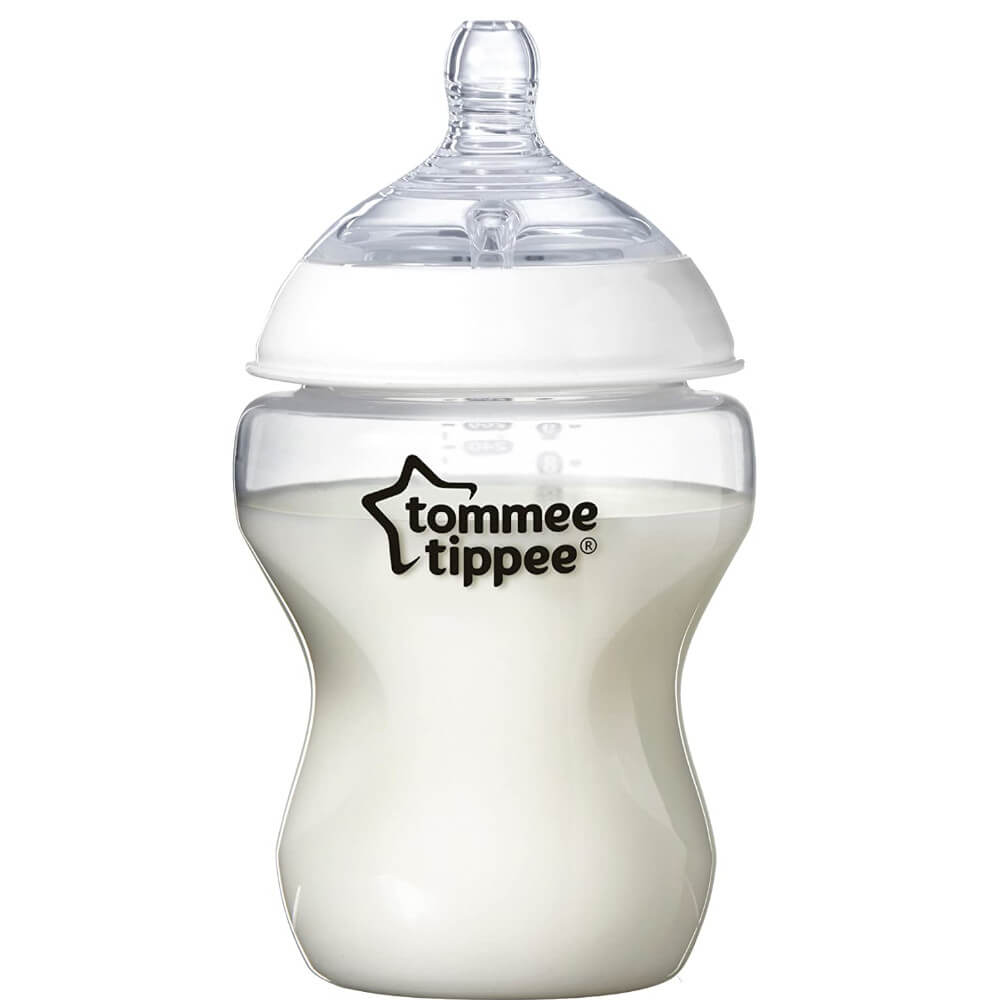 Tommee Tippee’s anti-colic valve is a fantastic feature and the compact, wide neck shape of the bottle allows for the free flow of milk and close up snuggles.

Dishwasher and steriliser safe. They come with newborn teats but work with all other teat sizes in the range. There is little more you would need in a bottle!

We love this starter set as it will be useful for many months of your baby’s life. You’ll adore the cleverly designed BPA and BPS free anti-colic bottles that reduce the burps by 84%.

Silky ‘skin soft’ silicone teats will delight even the fussiest of little ones. Tests show that an amazing 94% of babies accept feeds from these bottles the first time they try them. 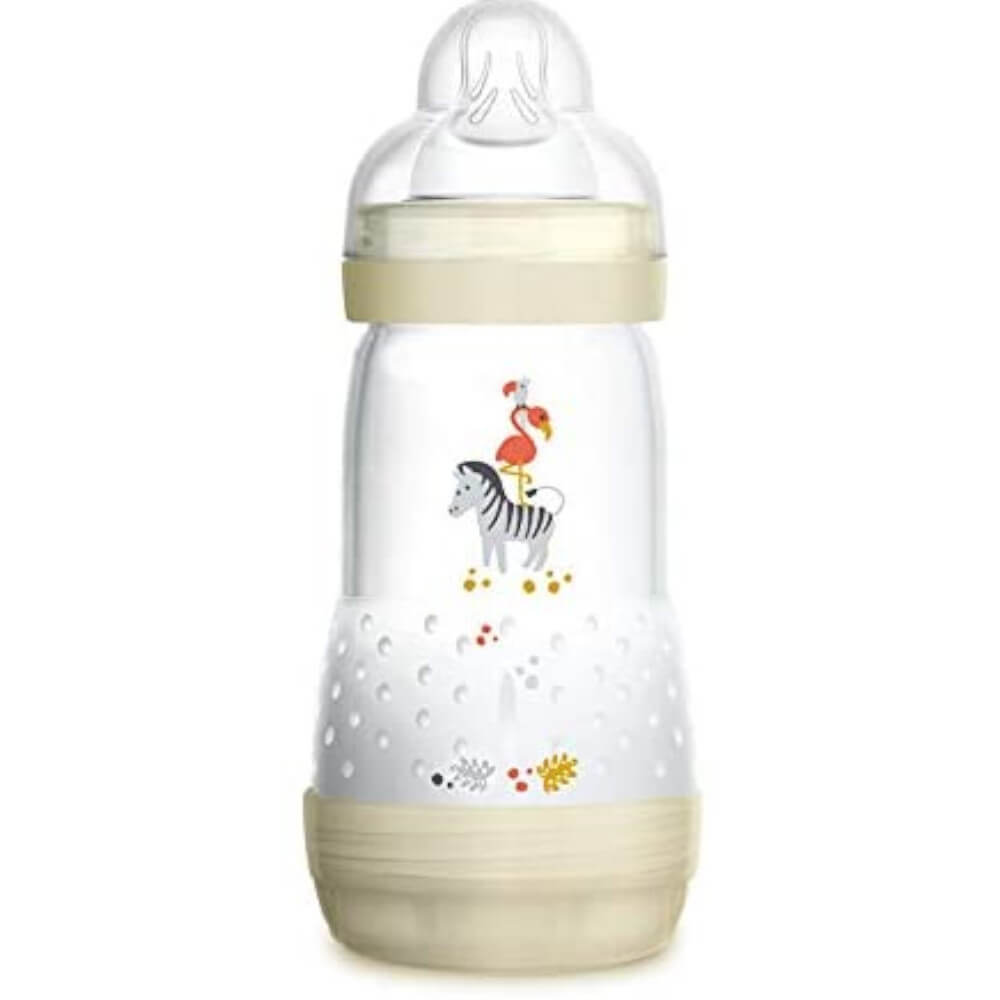 The kit includes four newborn size bottles, four larger bottles and a variety of teats. There is even a soft-spout and set of bottle handles for transitioning to a sippy cup.

The fantastically easy and quick ‘self-sterilising’ nature of the bottles makes life easier for busy Mums and Dads and that has to be a good thing!

Avent is a parenting brand that has been trusted for many years and their bottles and teats don’t disappoint. The BPA free extra soft teat was created to resemble the breast.

Latch on is made simple and fuss free by the flexible ‘spiral’ and squishy ‘petals’ that are carved into the wide neck of the teat. 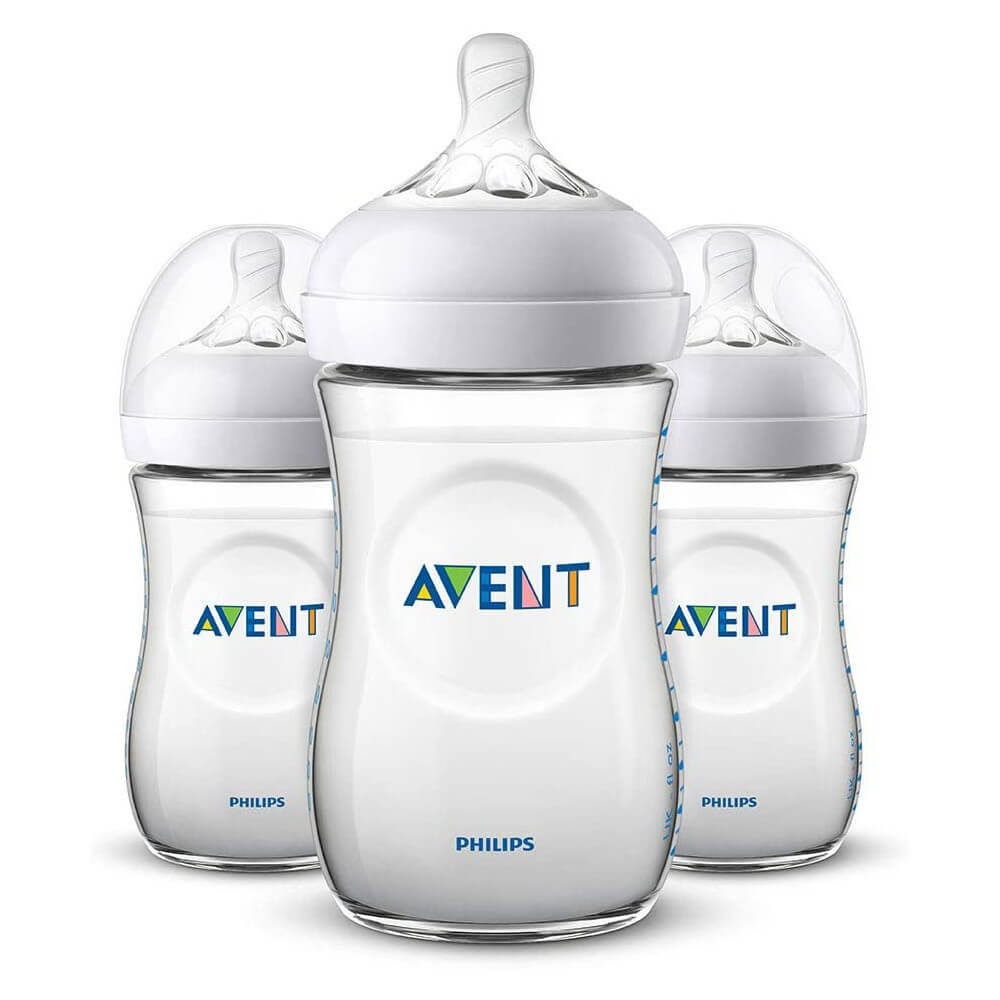 The shape of the bottle is slightly less compact than other brands and we think it’s important for parents to have the option to try an alternative. We found that the bigger ‘waistline’ of the bottle makes it easier to tip the last of the milk into the teat.

There are two main sizes of baby’s bottle and which one you use depends on the amount of milk your baby is drinking per feed.

The best anti-colic bottles have a dedicated preventative valve in the teat or body of the bottle. The key to minimising how much your baby suffers from painful colic is reducing how much air they swallow.

Self-sterilisation is a feature that is quite new to the nursery market. So, how does it work? It’s super simple!

As your baby grows, they will show more interest in feeding themselves. A bottle that has a hole in the middle and two handles is a fab way to encourage that independence.

These kinds of bottle are usually cheaper and will have fewer of the features such as anti-colic or teats shaped like a nipple.

How many baby bottles do you need?

How many baby bottles do I need? That is the ultimate question that a soon to be bottle feeding parent will ask. You will want enough for a day of feeds without needing to frantically wash and sterilise but not so many that you will waste money.

We recommend buying one bottle and teat of a particular type to test how your baby will respond. When my first child was tiny, she flatly refused to accept the first five kinds of bottle we introduced her to. There is no such thing as a bottle babies all love!

Once you have found a bottle and teat that your pride and joy will happily feed from, then follow these guidelines as to what to buy initially:

Each size of teat will have a different number of holes in the tip to adjust the amount and speed of milk as it flows.

Teats for bottles that advertise themselves as ‘anti-colic’ will minimise any excessive mixing of air with the milk. Bubbles cause wind and that will leave your tiny tot with tummy ache and an upsetting need to burp!

A teat with a nipple shape and texture

For many babies, this style of teat increases acceptance and helps them to latch on just as they would during a breast feed.

Some babies will struggle to accept the change from breast to the bottle. There are lots of bottles with teats that mimic the feel of a nipple but sometimes trying a teat that is totally different can be the key to success! If you’ve tried each and every bottle and your little darling still refuses, take one last shot and you might be surprised.

It’s easy to see when your baby is drinking from a teat that is too fast. They will splutter as the excess milk dribbles down their cute little chins. Wind and colic will also become a problem as they gulp more air.

So, when to change teats? A baby who needs a stronger flow of milk will grow frustrated during a feed.

Just because they are getting older doesn’t mean a baby needs to move up the bottle teat sizes. As with most aspects of parenting, take your cues from your son or daughter, they will tell you when to use size 2 teats on their bottles of morning milk.

We're constantly on the look out for every sale & discount and send you the best deals straight to your inbox. So you never miss an opportunity to get the best products at a bargain price!

Selective best buy, reviews and organisational advice to help make your life as a parent easier.

Want to ensure your baby is  always a step ahead?

We read every studies and bring you a digestive and actionable tips to help your baby develop its intellect and creativity to its full potential.